Today’s invention is a set of rotorblades on a massive helicopter which would be powered by a UAV docked on the end of each.

This would allow the fuselage space normally occupied by engines to be filled with freight or people (a smaller motor would be needed to drive the tail rotor). 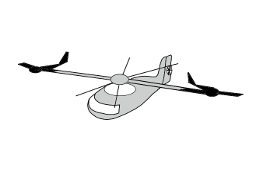 The number of drones might be variable, dependent upon the load to be transported so that a set of say six, 10m carbon-fibre blades could be driven by a balanced set of up to six small aircraft.