Inspired by the Aero-engineering designs of Burt Rutan, I began to wonder what happens to the handling characteristics when an engine fails aboard a multi-engine jet.

Today’s invention is to equip such aircraft with under-wing rails (orange) (like those used to support munitions on military planes). 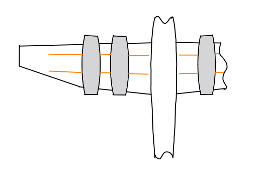 In the event of an engine failure, the remaining engines can be repositioned quickly by sliding laterally along under the wings.

This allows their centre of thrust to be kept in line with the fuselage and the flight dynamics changed as little as possible.