Autonomous vehicles are only just beginning to become a reality. Although there are many potential safety benefits, the general problem of how to avoid motorised mayhem is by no means solved.

Today’s invention is a local application of autonomous vehicle technology. 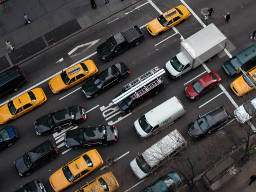 When a tailback occurs, many vehicles are travelling close together at low speed. There is always a lot of braking and acceleration which is unnecessary -caused by amplification of small overcorrections by distracted or tired human drivers (as well as speculative lane changing).

Today’s invention is an electronic control unit, fitted to vehicles, which senses that the car has been involved for say, 30 seconds, in a regime of slow motion and/or start/stop driving.

On receipt of signals from neighbouring cars that they too have sensed this regime, their electronic boxes would take over throttle and brakes, coordinating them across a whole traffic stream (it would also restrict steering to maintain parallel traffic flow).

This low-speed cruise control would constrain all vehicles to move at a near-uniform, speed without the usual risky and inefficient high levels of acceleration and braking. Just attempting to maintain equal distance from trailing and leading vehicles would probably work at low speeds.

This would then allow speed to build up smoothly, together with separation distance, so that a tailback or jam could disperse with maximal ease.