I share my surname with the designer of the Titannic, so watching the launch of big ships has a special fascination for me.

Today’s invention is a way to retrieve some of the massive amounts of potential energy stored in a ship under construction on a slipway. 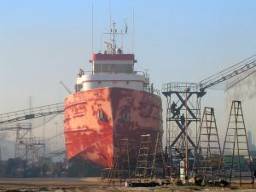 Ships, when the bottle breaks on their bows, currently have to slowed down by various means, including drag chains, in order not to knife across the dock channel and run aground.

Instead, I’d suggest holding the ship in place with chains which are wound around an onshore axle. As the ship descends, the chains turn a giant flywheel attached to a generator. In this way, not only is the ship’s launch more controlled, but some of the energy can be converted to eg light the yard or power its machinery.