The fashion for standing desks has encouraged quite a few people to work standing up. Some of them feel better for the extra exercise this seems to provide. 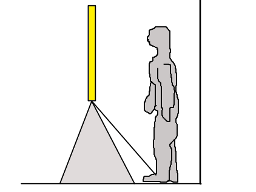 Instead of allowing yourself to become a couch potato, in the evening tv watching could only be done when standing up. This would limit the wasted hours in front of soap operas as well as the damaging effects of lying about for hours.

The tv would be positioned near a corner of a room and placed on a pyramidal base, bolted to the floor. The tv would not be free to turn.

Given no means of placing even a stool in front of the screen, viewers would simply stand until they had had enough.