No-one who goes to a casino should trust the House.

Today’s invention allows punters some extra measure of control over games of chance…but also limits their ability to cheat. 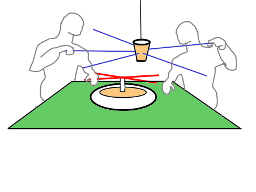 Everyone sitting at a roulette table would have access to one of the extended arms on the wheel (red).

This would allow control of the spinning to be shared by several individuals.

The croupier would only be responsible for placing the ball in a suspended cup which would be similarly shaken by the players pulling on strings (blue).

The ball would drop through a mechanical trapdoor actuated automatically after a fixed time period.

People would thus feel more involved in the gambling. It would also be very difficult for even a coordinated subset of players to attempt to influence the outcome of plays.

This crowd approach could also be adapted to any game in which dice are thrown.