I’ve been fascinated by shape just about forever. One reason, I suspect, for this is that I have mild synaesthesia (I don’t ‘suffer’ from it, mostly it’s a great benefit -when not trying to learn mathematical symbology).

Anyway, related to this is that fact that I had great difficulty, at 5 years old, in distinguishing between eg p,q and d,g etc. 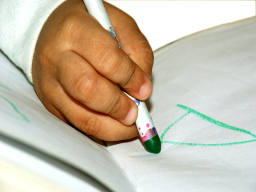 Today’s invention is a font for apprentice writers and dyslexics.

Each letter could be typed and appear on the screen in the usual way but instead of being created instantaneously, it would be rendered in the same sequence in which the strokes would be made by a pencil. Sound effects would be used to reinforce this sequence and thus ‘2’ would sound like ‘zwishnnnsaaaa’ as opposed to ‘aaaannnnnsaaaa’, which is of course ‘Z.’ Similarly, the first part of a shape to be drawn might be red and the subsequent parts take on the colours of the rest of the spectrum*.

This would help the learner to appreciate the difference between making a 6 and a 9. The speed with which alphanumerics are created on the screen could be varied to accommodate the progress in an individual’s learning (and perhaps even vary per letter, given that some are much harder than others).

*For synaesthetes, who may already hear letterforms or see them in colours, these features might have to be individually suppressible.