When a vehicle comes under fire (whether it’s a limousine or a personnel carrier), someone may have glimpsed the direction from which the muzzle flash came (assuming they avoided being hurt) but it’s hard to respond fast enough to mount an effective defence.

There are also systems which attempt to detect the origin of the firing by listening for the acoustic source of the weapon’s crack. This is a tough task, given that there is usually a lot of background noise and that many weapons may be in use simultaneously. 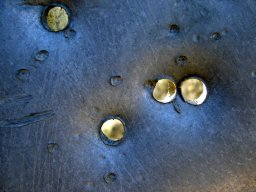 Today’s invention is an alternative which might make attackers think twice.

Vehicles would be covered with two layers of mesh, spaced apart by a few centimetres. Each of these would carry a network of wires which could be used to sense the location of any damage. A round from a firearm would easily hole both screens and knowledge of the locations of the penetrations would allow a very fast calculation of its incoming trajectory, by an on-board processor.

Fire could thus be returned automatically, possibly even before the arrival of the next shot.