Wind energy is obviously valuable but limited by the fact that not everywhere with a pressing need to operate the toaster has sufficient wind speed to justify spending $20M on a windfarm (Doubling wind speed creates an eight-fold increase in potential power output).

Windspeed basically increases with altitude, so that jet steams, at about five miles up, can be moving at 300 MPH. 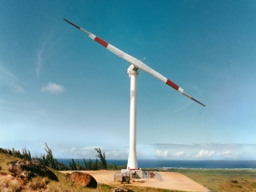 Today’s invention: Imagine piggybacking a redundant airliner (as in the early days of space shuttle testing), stripped of non-essential components, to an altitude of five miles or so.

The airliner could be equipped with a very large set of turbine blades (which would fold out once the machine had been released from the piggyback plane and tethered to the earth using draglines, like a large kite). Inside, there would be a gearbox and an ac generator. These days we are actively planning carbon-nanotube space elevators, so much of this technology is not actually rocket science).

The result would be massively efficient, renewable energy output (via electric cables down a tether cable)…also there would be few complaints about unsightly turbines, or the impact on birdlife. And if the wind speed drops off? Well, you could run the fans and generator backwards for a while on electricity previously harvested to big batteries on the ground.

I just discovered this…hope they aren’t thinking of applying for a patent!